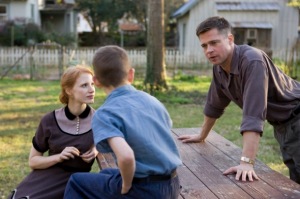 SYNOPSIS: Jack O’Brien (McCracken) and his two brothers (Eppler, Sheridan) grow up in the 1960s, spending their days carefree and full of play. We witness firsthand the loss of innocence through Jack’s eyes as he experiences his first brushes with death and suffering. The world is no longer as perfect as he believed and his family struggle with his quick progression into adolescence. Running parallel to this, an older Jack (Penn) tries to atone and understand past events in his life, working towards being able to forgive his father (Pitt).

To say The Tree of Life is grandiose is a complete understatement. It is beautiful, indulgent, heartfelt and extremely honest. And I truly believe it to be a masterpiece. Clichés aside, Terrence Malick’s Palme d’Or-winning film has been rather controversial, being booed at Cannes and five people walked out when I saw it. But I believe this to be a sign of a great filmmaker, somebody who divides opinion and stems controversial discussion. At the end of the day, this isn’t going to be a film people forget.
END_OF_DOCUMENT_TOKEN_TO_BE_REPLACED