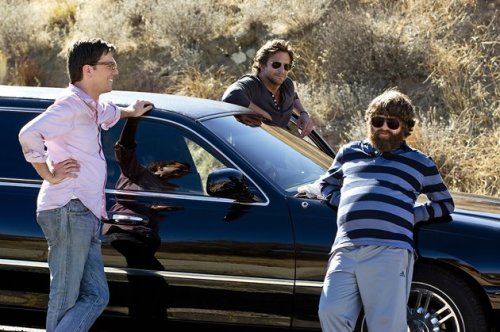 Synopsis: With Alan (Zach Galifianakis) off his meds, the Wolfpack form an intervention. On the way to rehab, the consequences of the first two films catch up with them as they find themselves the missing link to get the intimidating Marshall (John Goodman) to his goal – a certain Leslie Chow (Ken Jeong).

Todd Phillips’ first two booze-fuelled bouts of cinematic amnesia may have grossed over $1 billion worldwide, but 2009’s THE HANGOVER never screamed with trilogy potential. The gang’s all here, but you sense they’re ready to leave the fun behind. And so, it turns out, are we.

Mixing up its inherent formula, PART III once again sidelines Doug (Justin Bartha), with the boys in pursuit of Chow after he stole from angry businessman, Marshall – yes, that Marshall. With so much of what’s gone before passing without consequence, it’s a brave move to tie-in the fallout, but this was never a serious franchise to begin with, leaving the balls to the wall manhunt formula sorely missed. With a not so subtle JURASSIC PARK reference during Alan’s giraffe-based motorway opening (one of the film’s many green screen distractions), Phillips’ nods to big budget actioners lay the groundwork for a big adventure, but this final swansong never quite delivers. END_OF_DOCUMENT_TOKEN_TO_BE_REPLACED

Trailer Talk: Killing The Kardashians, Turtle On A Plane, Lots Of Gangsters And David Bowie

This week we reunite with Stifler’s mom, learn what it’s like to be a substitute teacher, dig for some oil, meet a dysfunctional family, learn to be original with our horror films, have the world’s greatest party, realise Milla Jovovich needs to stay at home sometimes, see a gay Haley Joel Osment, travel to Albania and meet a psycho Kristin Scott Thomas. Let’s talk trailers: END_OF_DOCUMENT_TOKEN_TO_BE_REPLACED

What a week! With the insane amount of Awards and nominations over the last two days it’s taken me a little longer than usual to post this. But this is definitely a nice break for me and one that doesn’t include having to write out Michel Hazanavicius’ name over and over and over…… The sad thing is that I can write his name without thinking now. Anyway, back to the trailers. This week Nadine and I (check out her blog here) bring you The Five-Year Engagement, The Lorax, The Darkest Hour, The Cabin In The Woods, Lockout, This Means War, Madagascar 3: Europe’s Most Wanted, Extremely Loud And Incredibly Close (TRAILER OF THE WEEK), The Three Stooges, The Iron Lady, The Lucky One, What To Expect When You’re Expecting and Battleship. Wowzer. Next week brings us something that makes me want to (and I probably will) cry – The Dark Knight Rises. END_OF_DOCUMENT_TOKEN_TO_BE_REPLACED

SYNOPSIS: With Stu (Helms) choosing to marry Lauren (Chung) in Thailand, he invites Phil (Cooper), Doug (Bartha) and future brother-in-law Teddy (Lee) along for the ride. After being roped into inviting Alan (Galifianakis) against his wishes, Stu’s preferred ‘Stag Brunch’ turns into another night of mayhem resulting in them waking up in a seedy apartment in downtown Bangkok – without Teddy. Their quest to find him involves severed fingers, cocaine-dealing monkeys and one rather unfortunate tattoo… Will they find Teddy before the wedding?

I have to admit I was fully prepared to have a lot of bad things to say about Todd Phillips’ The Hangover Part II. Like usual, I stupidly allowed myself to read a number of reviews and decided the film was a carbon copy of the original before I’d even seen it. I did this with X-Men: First Class, followed the hype and was disappointed. I did it with The Hangover Part II and was pleasantly surprised. Is it too much to hope this theory will work with Green Lantern…? Thought so. END_OF_DOCUMENT_TOKEN_TO_BE_REPLACED