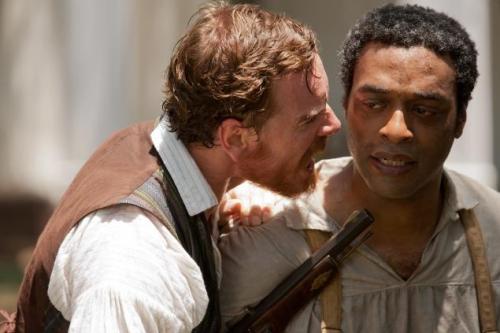 Synopsis: Based on the true story of Solomon Northup (Chiwetel Ejiofor), a free Black man who was captured and sold into slavery. His struggle to keep his identity and stay alive are made even more difficult when he finds himself bought by slaveowner Edwin Epps (Michael Fassbender).

Following on from haunting, visceral Fassbender machines, HUNGER and SHAME, Steve McQueen’s latest, incredibly raw triumph grabs you by the scruff of the neck and demands your heart and soul. 2013 delivered two very different tales of Black oppression courtesy of Tarantino and Spielberg, but this nigh-on flawless retelling of Solomon Northup’s plight is the one to beat in 2014.

Finding art in the smallest of things, McQueen’s proclivity to linger where others would call cut fascinates and enchants – notably in an incredibly tense scene that finds Solomon’s life hanging in the balance whilst others go about their daily tasks. Cinematographer Sean Bobbitt once again melts into the director’s vision, creating numerous iconic moments from the spraying of fresh blood at the hand of Edwin Epps’ whip to a journey following Solomon through the woods. Malickian interludes serve to measure the years passed, but refrain from self-indulgence, instead letting us appreciate minor details and transforming 12 YEARS A SLAVE into a transcendent, necessitated rewatch.

A constant disharmony is cast over proceedings on Solomon’s descent into slavery, lacing the audience with an unsettling anxiety. He may find himself relatively protected under the watch of the compassionate Ford (Benedict Cumberbatch), but Paul Dano’s delightful loose canon, Tibeats, bears down on him as heavily as the Southern sun and buzzing flies. His musical talents may have brought him to Ford’s farm, but with Tibeats’ racist chanting eerily set as a bass line to the supposed freedom of church, there is much discord beneath the surface.

For all the death and wrongdoing that surrounds him, Solomon is defiant that he will not let sadness drown him. Chiwetel Ejiofor’s stoic, frighteningly realistic performance miraculously never becomes burdened by self-pity or grief, reserving his emotions for a final, silent outburst. A violin serves as his catharsis, but a funeral scene that plays host to Solomon’s true moment of musical liberation is enough in itself to secure Ejiofor’s Oscar fate.

Though based on Northup’s book, the sadistic, desperately lost Epps keeps you questioning Solomon’s safety. Alcohol-fuelled unpredictability and jealous rages over Queen of the Field, Patsey, once again prove Fassbender and McQueen an unstoppable force, with Lupita Nyong’o delivering a sensational breakout role as his compliant yet resolute source of fascination.

McQueen’s apparent, ‘no boundaries, no restrictions’ rule once again works wonders in 12 YEARS A SLAVE, with every character authentic and each casting choice soaring under his supervision. Though Brad Pitt and Garret Dillahunt suffer a little with their characters’ expositional needs and a few supporting players are forgotten along the way, they all serve as vital in this extraordinary fight for freedom.