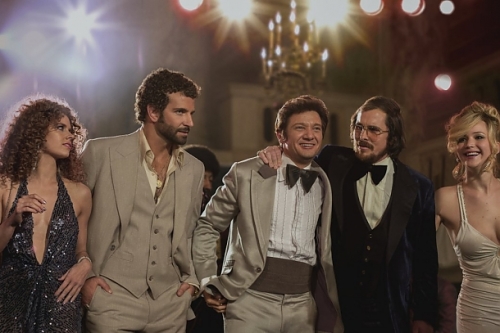 Corrupt politicians, sleazy American nightclubs and the threat of the mob may be far from novel, but David O. Russell’s AMERICAN HUSTLE feels extremely apt and relatable in a time of growing political distrust. Handled ever so coolly by the director and his stellar cast, every line and action is meticulously placed, right down to the very precise positioning of Irving’s glued-on hairpiece.

In a time where the hair was high and the necklines significantly lower, the audience are immediately intoxicated by the 1970s hairspray and rich mahogany. Elton John, David Bowie and The Bee Gees may punctuate the severity of the situations our main trio find themselves in, but amidst its slick, neon skylines, AMERICAN HUSTLE means business.

Continuing from Academy Award magnet, SILVER LININGS PLAYBOOK, the dialogue sparks in a screenplay penned by the director himself. Jennifer Lawrence’s Jerseyfied, nail varnish-sniffing firecracker may steal the show (you’ll never hear ‘Live And Let Die’ in the same way again), but it’s Bale and Adams’ BONNIE AND CLYDE tale that houses the film’s heartbeat. Bonding over a love of Duke Ellington, the masters of reinvention and trickery soon find a taste for something a little riskier than running a chain of dry cleaning outlets. But when the luck on their questionable loans agency runs out, they are left with no other option than to do the dirty on fellow conmen to avoid the judge’s gavel.

Bradley Cooper once again excels under Russell (someone he owes a great deal to) as the FBI agent Sydney and Irving find themselves at the mercy of. Keeping you guessing as to whether his love for the rush of the rip-off has him falling prey to the folly, he may struggle to keep his emotions in check, but delightfully finds time to bounce off fellow agent, Thorsen (Louis C.K.).

Though there’s not a weak link in the cast, things unfortunately venture into the anticlimactic with the inclusion of an underexplored, uncredited cameo that sadly takes time away from the eternally underrated Michael Pena and Jeremy Renner’s solid, fun turn as the people pleasing family man, Mayor Carmine Polito.

For all its glamour and seduction, AMERICAN HUSTLE is as much about love as it is distrust. The lust may drip off the screen as characters are left wanting, but heartbreaking moments that see fiery arguments perforated by honour and commitment are very much at its core. From Bale’s phenomenal, tragicomic performance to Lawrence’s ability to steer Irving’s unstable wife Rosalyn away from parody, Russell’s latest is a riotous web of intrigue and deceit that enthralls with its double-crossings and love triangles. Saturated with style and boasting a grainy lens that cements it as a film for the ages, you may find it nigh on impossible to root for anyone, but you’ll sure as hell enjoy the fight.