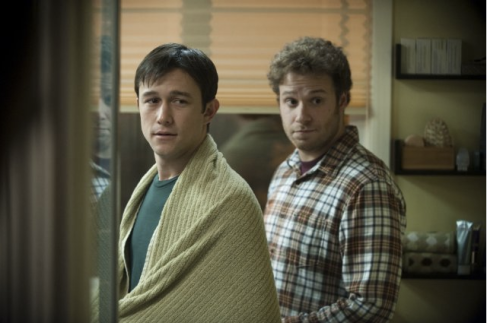 SYNOPSIS: Based on a true story, when 27 year-old Adam (Gordon-Levitt), a clean living radio employee, is diagnosed with a rare form of spinal cancer, his whole world starts to slowly crumble around him. Best friend Kyle (Rogen) wants to preserve his quality of life by keeping him partying, whilst his mother, Diane (Huston), wants to move in with him and girlfriend Rachael (Howard) to take control.

Although it’s a film about cancer, you shouldn’t walk into 50/50 expecting over dramatics. You also shouldn’t expect a laugh a minute, gross-out comedy simply due to Seth Rogen’s presence. What you should expect is a mixture of the two, sensitively handled by director Levine, ensuring Will Reiser’s script is handled with care to deliver a film that carries great moral value and a hell of a lot of substance. And most of this is solely down to Joseph Gordon-Levitt.

One of the most natural screen presences around, Gordon-Levitt never feels like he’s repeating himself, with the facial expressions and little noises he makes completely synonymous with his unique style. Being so subtly unpredictable makes him incredibly good fun, even in the deepest, darkest moments of 50/50. Mapping every emotion from denial to downright despair, Gordon-Levitt has us in the palm of his hand, ensuring we invest all our focus on him, even when such a strong cast surrounds him. But it’s not all doom and gloom, with a scene where Adam is high on weed infused cookies genuinely laugh out loud funny amidst a hospital full of cancer riddled and dead bodies.

50/50 could very easily have become The Seth Rogen Show, with him playing nothing more than a slapstick and annoying sidekick. But it shows quite how much Reiser’s story meant to his real life friend Rogen that he assures Levine keep Adam the focus of the story. It also results in a far more toned down and believable Rogen, further removed from his usual Apatow schtick.

Also currently onscreen as Jessica in The Twilight Saga: Breaking Dawn – Part 1, Kendrick’s Katherine is far less self-assured, a young therapist trying to help Adam come to terms with his completely unexpected situation. Already Oscar nominated, there’s absolutely no question of how huge Kendrick could (and should) become, with her incredibly natural and ditzy turn here assuring she gels perfectly with Mr Gordon-Levitt. While Katherine is trying her hardest to help Adam, his girlfriend Rachael is finding it more than a little impossible, making it all about her and being the complete polar opposite of how Kyle is trying to turn it to Adam’s advantage. But even Kyle’s approach doesn’t work, leading Adam to feel that everyone is using him for their own personal gain. Even at the party his work throw for him, all they do is harp on about his condition, leaving him absolutely no room to breathe.

If Katherine is a little ditzy, Adam’s mother is most certainly headstrong and defiant. Huston is a joy to watch, her character of Diane the epitome of a ‘proper’ mum, trying not to smother her son in his time of need, but nevertheless feeling absolutely helpless. Bringing a brilliantly understated sense of comedy to the role, Diane is a woman you would never want to argue with, and everything down to the waiting room thermostat must be perfect for her son – or face the consequences.

The comedy within 50/50 never feels out of place (most of it coming from the wonderful older patients Adam meets during chemo) when you appreciate what writer Will Reiser went through, resulting in any arguments of this being insensitive or in poor taste to be completely irrelevant. It definitely has its fair share of dark moments and heartbreak, with a beautifully tender moment Adam shares with his parents before some intense surgery proving just how realistic and upsetting the whole situation really is.

An oddly very uplifting film pulled together by very funny and strong performances, 50/50 never tries too hard and has a very charming low budget feel to it. Keeping Adam at the core ensures that other elements such as Katherine’s obvious attraction to him never feel out of place or distract from the central tragedy, only adding to its appeal. The script is genuinely as upsetting and subtly educational as it is funny and inspirational, but the words work so well because Joseph Gordon-Levitt gives us a character who we fundamentally give a damn about.